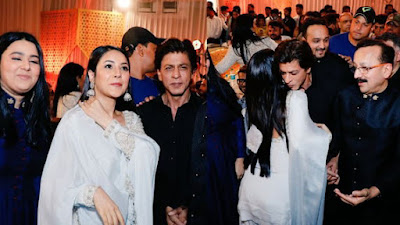 The lovely #ShehnaazGill and the iconic #ShahRukhKhan shared a warm moment at Baba Siddique’s Iftaar party! We’re sure their massive fanbases will be thrilled after seeing this exclusive video. ❤️🤍 pic.twitter.com/vXpCadWoIs

The event held in Mumbai was attended by many Bollywood and television personalities. Shehnaaz Kaur Gill also arrived for the party looking gorgeous in a gray ethnic outfit. For this event, the actress wore a beautiful gray salwar kameez. She kept her makeup simple and left her hair loose. Shahrukh Khan looked very handsome in a black pathani suit. The actor was seen in short hair without a beard.

Shehnaaz Gill was snapped at the Mumbai airport on Monday.