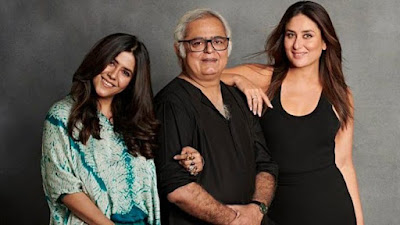 After the film ‘Laal Singh Chaddha’ starring Kareena Kapoor and Aamir khan . Where she played his character’s love interest, while the film has received mixed reactions from the audience, She has started working on her maiden production.

However, the actress hasn’t revealed its name . Shet ook to the story section of her Instagram and posted an picture of a film’s script with ‘Shahid ‘ Helmer Hansal Mehta’s name . In the picture shared by the actress one can see a copy of a film script. She smartly concealed the title of the project by keeping a pen over it, thought one can see the words ‘The’ and ‘Murder’ .

A year ago in August 2021 , Kareena had announced that she was getting in the  production in collaboration with ‘Ekta Kapoor’s ‘ Balaji Telefilms. Kareena Kapoor had posted a image of herself with Ekta Kapoor and Hansal Mehta announcing that she would be donning the producer’s hat ‘Soon’ .

Apart from this Kareena Kapoor also has ‘Sujoy Ghosh’s ‘  upcoming thriller, which is based on the Japanese book ‘The Devotion Of Suspect X ‘ . The actress will be sharing screen with ‘Jaideep Ahlawat’ and ‘Vijay Varma’.

Kareena Kapoor Khan also has a film with the producer ‘Rhea Kapoor’ of her film ‘Veere Di Wedding’ in the pipeline, She add’s ‘ that Rhea will make the announcement soon . The film is not about star’s, instead it’s about strong women coming together ‘ .