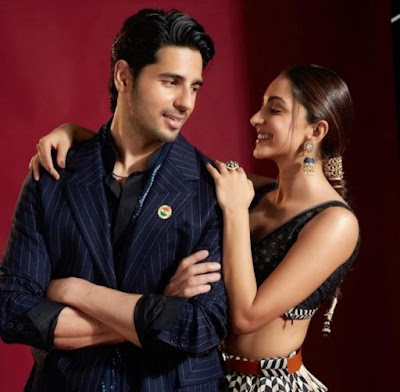 One of the Bollywood most loved couples Sidharth Malhotra and Kiara Advani has been in the headlines singer they made some confessions on Karan Johar’s show ‘Koffee with Karan season 7 ‘ featuring Sidharth and Vicky Kaushal, Karan Johar hinted that a wedding between Sidharth and Kiara might soon be on the cards.

After their beautiful chemistry in 2021 ‘Shershaah’ in which Sidharth portrayed the late captain ‘Vikram Batra and Kiara portrayed his love interest ‘ Dimple Cheema’. The rumored couple will be reuniting again for a romantic comedy directed by ‘ Shashank Khaitan’.

A source close to the development told that ‘ The yet untitled rom-com will be directed by ‘ Shashank Khaitan’, known for films like ‘ Badrinath ki Dulhania ‘ and ‘Humty Sharma Ki Dulhania ‘. The filmmakers had a detailed meeting with Sidharth and Kiara, Both have agreed to be a part of Shashank’s rom-com. The paperwork is still remaining, if all goes as planned, the film will be on the floor by the end of this year.

The film falls in the space of Shashank’s Dulhania series. The filmmaker was toying with this idea to complete the trilogy, but unfortunately, things did not materialize. A source stated ” The love story will revolve around a mystic situation where their souls will get interchanged. Titled ‘ Adal Badal’, we will see the two in a never seen before avatar.

The movie is set to be a rom-com with lots of VFX and CGI work involve. The film is reportedly produced by ‘ Sunir Kheterpal’. On the other hand, Sidharth is busy shooting for ‘ Rohit Shetty’s Indian Police Force ‘ and also has ‘ Yodha ‘ with Disha Patani. And Kiara has ‘ Govinda Naam Mera’ with Vickey Kaushal, ‘ RC15 ‘ with ‘Ram Charan’, and ‘Satya Premki Katha’ with Kartik Aaryan.